Prevagen vs Provasil: In this comparison, we’ll see which of these two natural brain supplements are safer and better at supporting your memory, cognitive function, and other aspects of mental performance.

Nootropic supplements like Provasil and Prevagen are used by more and more people to boost their mental capacities for work, studies, sports, and everyday life.

In other words, it doesn’t matter if you’re in your 60s or 20s – these brain supplements can really improve your quality of life, provided they work and have safe ingredients.

So, do Prevagen and Provasil work? How do they compare against each other? And where do they sit on our list of the best nootropic supplements? Our team finds out below.

Prevagen vs Provasil – The Basics 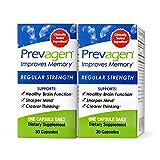 This is a memory supplement that comes in regular strength (10mg) and extra strength (20mg) capsules. Each bottle contains 30-60 capsules, depending on which version you buy.

If you like flavored pills, then you’ll be glad to know Prevagen offers chewable tablets too! 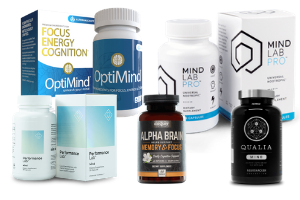 Prevagen is originally produced by Quincy Bioscience, a company from Wisconsin USA.

We did a little digging into Quincy Bioscience and found out they were sued by the Federal Trade Commission (FTC) for making false advertising claims.

However, what surprised us the most is that Quincy Bioscience runs the same controversial ads to this very day.

If you check their official website you’ll see some quite odd ads with jellyfish, which is the source of Apoaequorin, the main ingredient in Prevagen that is said to boost your cognitive function.

So, do Prevagen’s ingredients actually work? Or did Quincy Bioscience make a supplement that only has marketing going for it, but not real science? You’ll find out below in the ingredients section!

However, the makers of this product say that it can also work for younger individuals, such as students who’re looking to improve their information retention.

Sounds good, but does it really work?

Well, one thing we’ll tell you straight away is that Provasil at least boasts a decent reputation online! Unlike Prevagen, it has never been sued for misleading claims or anything like that!

So that’s good – Provasil wins in the brand trust department for sure.

But now, we’ll check the ingredients of both products to see which one can actually deliver you the promises they make.

In terms of ingredients, neither formula looks too impressive, but if we had to pick, we’d go with Provasil.

Even though Provasil has some ingredients that are completely ineffective for brain health, it still uses a few decent nootropics that may aid your memory.

Prevagen, on the other hand, only has 2 ingredients, one of which is an underdosed vitamin, and the other is an unproven ingredient. See for yourself below:

This fancy-sounding protein is extracted from glowing jellyfish. Quincy Bioscience has made claims that it can boost calcium signaling and remove plaque from your brain that is associated with neurodegeneration. However, the only studies we have on Apoaequorin were financed by Prevagen’s makers and were done by scientists whose work had been removed from PubMed in the past because of falsified results.

Based on this, we can’t recommend Apoaequorin as an effective brain ingredient.

The issue is, it’s underdosed in Prevagen. Vitamin D optimal dose is at least 3,000-5,000IU per day to reap its therapeutic cognitive benefits.

Considering that you may not be getting enough vitamin D from direct sunlight (statistics show 1 billion people are deficient), it’s crucial to supplement with higher amounts of this vitamin to ensure optimal health.

Does Vitamin D Increase Dopamine? A Look at the Science

So vitamin D is a good choice in Prevagen for sure. But alone, it can’t do much! You’ll want to pair it with other proven brain ingredients to feel an impact on your cognitive function.

Within each serving of Provasil you’ll find:

Our Thoughts on the Ingredient Profiles

Provasil wins for sure, but it’s far from a perfect supplement itself.

While it has more ingredients, and better ingredients, Provasil is still missing some of the most effective nootropics.

These include Lion’s Mane (brain repair), Citicoline (memory, cognitive decline), Vitamin B6 (mood, cognition) and a few other nutrients.

Vitamin B6 as a Nootropic

However, this is not the biggest issue with Provasil. The main problem is that it uses some great ingredients, but they’re underdosed – making them completely ineffective!

Still, compared to Prevagen’s formula which consists of Apoaequorin (which doesn’t work) and vitamin D (which is underdosed), Provasil easily wins in this department! Prevagen vs Provasil: Side Effects

Prevagen, as ineffective as it is, shouldn’t give you any side effects. Vitamin D is dosed very lightly, and Apoaequorin hasn’t been shown to produce any adverse effects – it doesn’t produce any effects at all.

Provasil does come with a slightly higher risk of side effects, simply due to the sheer number of ingredients it uses.

However, the ingredients themselves are well studied for the most part, and come in relatively safe doses. So if you’re a healthy person, then neither Prevagen or Provasil should cause you any troubles!

Prevagen is definitely the more hyped product between the two. It boasts tons of user reviews online, including on Amazon and other 3rd party sites. Some users are happy with it, others are not.

You can never tell which reviews are truly legitimate and which ones are based on the ‘placebo’ effect.

This is why we always say it’s best to be your own judge, and to look at the research behind the ingredients. This is the surest way you’ll tell if the product is worth your money or not.

Prevagen vs Provasil Price and Value For Money?

Provasil costs up to $79.99 on Amazon, and around $46 on the official website. Obviously, you should do your research before buying this supplement to make sure you get it for the lowest price possible.

However, even for $46, it’s still an expensive supplement and not the best value for money considering many of its ingredients come in cheap, poorly absorbable forms.

Prevagen, on the other hand, costs around $40, depending on where you buy it. Considering that it doesn’t work at all, some will go as far as to say it’s a complete rip-off! We don’t blame them!

So that concludes our Prevagen vs Provasil comparison.

While Provasil is a better supplement than Prevagen – it has more ingredients and also more effective ingredients – it’s still far from the best brain supplement we’ve reviewed.

It costs a ton, even more than some of the top-rated nootropics, despite using cheaper and less bioavailable ingredients than its competition.

As for Prevagen, it only uses 2 ingredients, one of which doesn’t even work, and the other being an underdosed basic vitamin. Safe to say this product is best left alone!

*Individual results may vary. Please speak with your doctor or physician before undertaking any new weight reduction, supplement, or exercise regime.

**Prevagen vs Provasil Disclaimer:  The information on this site has not been evaluated by the FDA. The products on this page are not intended to diagnose, treat, cure, or prevent any disease.

Results in description and Testimonials may not be typical results, and user experiences might vary. We may earn a commission if you click the links and buy the products featured on this page.